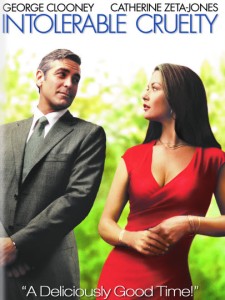 Love is fleeting as it’s been said. That’s why we have prenups. Serial golddigger Marilyn has a made a career of “marrying right” in order to divorce when the check clears. Finding Mr Right is a distant second to scoring Mr Right For Now.

When Marilyn solicits Miles Massey’s law firm for her latest chump to dump, he smells a rat and a scam. And an irresistible fiscal black widow Miles can only regard as “fascinating.”

And the case. Right, let’s not forget the case.

Short one this week. Kick back. Grab some Cheetos.

So. Do you remember your first Coen Brothers’ movie?

I do. They’re kinda like an event nowadays. Films made for a cult audience before the cult’s even made. I first experienced that hoo-hah back in college, but I’m getting ahead of myself. Again.

My first toe-dip into the Coen’s olympic-sized film pool was by way of Raising Arizona. Didn’t get it then. I was a kid. Liked Nic Cage because he was loony and hammy. Saw Arizona the same year Peggy Sue Got Married came out on video. Even though being a kid and totally removed from the film’s 50s pop culture references I liked that film enough. It was where I first met Cage really, and got reacquainted with that funny lady from Romancing The Stone, too, which was nice—mostly for Cage’s nasally delivery. The whole time travel thing was cool, too. Such simpler movie watching times then.

So me being a nascent Cage fan, hearing about the Arizona movie I checked it out. Like I said, didn’t get it. Too young. But Nic was clowning around and the whole goofy kidnapping caper tickled my fancy, enough so that I still remember the film aeons later. Must’ve left an impression.

The Coen’s movies sure do that. Leave an impression. It might not always be a good impression, but their signature sticks in your teeth like a Jolly Rancher, regardless of being either sweet or sour. Sure, other directors have their signature thumbprints all over their work (e.g.: Scorsese, Spielberg, Kubrick, Hitchcock, etc), and you look forward to their usual antics, but the Coen’s work is so oblique, so abstract, so f*cking weird we don’t get thumbprints. We get a five-fingered slap. And it can feel oh so good.

But for every Fargo, The Big Lebowski and Miller’s Crossing, we can also get The Hudsucker Proxy, The Ladykillers and Paris, Je T’Aime. I ain’t saying the latter films suck, but the Coen impression is skewed here, beyond the wacky scripts and bizarre acting. There’s inconsistency with the impression. Even some of Spielberg’s lesser films still smell like a steady Spielberg project. Coen films are a lot like comparing sex and pizza. When it’s good, it’s good, and when it’s bad it’s still good. But for both accounts, when it’s bad is isn’t necessary bad when it comes to Coen films. But it can be unsatisfying.

Akin to my Raising Arizona story, that Coen impression can be so palpable that when you watch one of their fluffier films you run the risk of walking away scratching your head. “What was up with that?” you may ask yourself after watching Inside Llewyn Davis two weeks after seeing No Country For Old Men. You dig? With the Coen brothers, it’s never really a good impression or a bad one. Across a continuum it can be a baffling impression. I understand all directors want to squeeze the orange every so carefully with each of their ensuing films, but the Coen’s work is so eclectic, and their quality is so all over the map it gets hard to adjust your lens.

She’s cunning. She’s deceptive. She’s gorgeous. And she’s loaded, which is separate from her other assets.

Marilyn Rexroth (Jones) is a serial golddigger. Professional golddigger is more apt, and she knows how to squeeze both a bank account and a scrotum with equal ease. The former is her weapon of choice. And her latest stupid, prey is on the chopping block, the cheating Rex Rexroth (Herrman). So to make sure she gets the biggest buck for her bang, Marilyn seeks out the best counsel against the law firm of Massey et al to secure the prenuptials.

Slick marriage attorney Miles Massey (Clooney) knows a ripe peach when he picks one. Marilyn’s beguiling…case proves to be a curious one. Miles suspects Marilyn isn’t the damaged, rueful ex-wife she appears to be. He scours about the law community trying to get some scuttlebutt on this woman’s true motives—which are painfully obvious.

But as Miles gets to understand his quarry, he finds himself slowly getting tangled in Marilyn’s web of…of…

Like I began to babble about up top, my first real Coen movie exposure came in my senior year of college. Not one of their films, per se, just the reactions to one. The movie of the moment then, whose buzz could not be killed with an entire pallet of Raid was The Big Lebowski. My peers raved. They cheered. They took the White Russian-soaked philosophical mumblings of The Dude quite seriously. A cult was brewing. I was hesitant.

I’ve always been suspicious of the mass pop cultural appeal towards the movie/TV show/band/book/yoga position of the moment. For example, when the novel The DiVinci Code was the book on everyone’s quivering lips, I steered clear. Since the majority of Americans are functionally illiterate, when the hoi polloi starts salivating over a few pages, I arch a brow. I once got a “recommendation” for Dan Brown’s opus from a bar buddy of mine. Her claim, “Don’t worry. The chapters are short” was hardly a ringing endorsement. Back when Lebowski was the flavor of the week, and my esteemed colleagues would just not quit answering all questions with, “The Dude abides,” I slinked away and said later, gator. It took many years for me to get around to see the thing. Then and only then I figured out what my friends were slobbering over. It’s a great movie, granted. I guess I had already seen a lot of other films from the Coen Canon before my eventual few frames with Walt and Donny, so when the hammer came down I knew what to expect. I wasn’t disappointed. And of course I was pleased. Because that crucial Coen impression was slathered all over the place.

Cruelty has the impression all right. It’s just not a good impression, and not in the sex/pizza paradigm, either.

Let’s get right to the point, Cruelty is a comedy in the vein of its Coen-helmed ancestor, Raising Arizona. Only it’s the opposite. Where the latter was an experiment in the bizarre, and totally left field compared to other comedies of its ilk back in 1987 (eg: Three Men And A Baby. Need I say more, Spock?), the former is a straightforward black comedy. Arizona was the anti-comedy. Cruelty is a winking screwball comedy. Almost, but lacks bite. A great part of the Coen’s impression is bite. Stinging, ribald, getting-under-the-skin bite. Cruelty has almost no bite. It gums. It’s goofy, to be sure as comedies like these are, but the movie flies by in such a gale that nothing gets a chance to take hold. Stick. Penetrate. Chafe. Ow.

Cruelty is a slick caper, this one. It’s not that there’s anything overtly off-putting here—acting’s good, story’s not dull, Jones is hot—but one gets the feeling that the Coens are deliberately holding back. You know, taking a few Ativan and seeing if they can bring wacky, campy sh*t to rise minus the late Randall “Tex” Cobb and his shenanigans. The end result here doesn’t feel very organic though, not the way like, say Fargo was. And that movie was a lot funnier than Cruelty is, albeit more stark. Then again Cruelty is a deliberate black comedy, trying very hard to be screwy, and maybe on purpose. I mean, it felt like the Coens were reaching for something here, something more mainstream in a comedy compared to their past efforts. But the whole thing just zooms by with nary a whit of subtly, like there’s some hurry to get to the resolution or the kitties will burn. It’s like staring into the microwave, watching that spinning cup of coffee boil over.

In simpler terms, slow it the f*ck down. Moving on.

Cruelty kinda reminds me of one of those daffy comedies starring Cary Grant back in the day. It’s would explain Clooney’s delivery, all snapping teeth, mile-wide smile and silver-tongued scene chewing. His Miles is a second cousin to Ulysses McGill in O Brother, Where Art Thou?—I know, I know. One more Coen movie citation and out the window with me—all fast talking and on the cusp of total ham. Whereas Ulysses tried to be an honorable husband and dad, Miles’ smarminess belies a petulant, pimply teen inside, always squirming with self-doubt. For all his wheeler-dealing, high-end divorce lawyer guise, what ultimately motivates him is getting girls to notice him. There are plenty of scenes when Miles is scampering about like spoiled, randy teenager, all bluff and bluster. It’s somewhat charming, but not necessarily endearing. Miles’ is ostensibly the protagonist; why’s he so reactionary?

Perhaps because Jones’ Marylin is so seductive, and not in the silk stocking kind of way. She’s a smooth operator, all right. Some master criminals scheme their schemes with maniacal glee. Well, so does Marilyn. Save the rare remorseful, crying jag she’s as scheming as they come. In a way, her nefarious lack of bluster makes her all the more Black Widow-type. Only instead of killing her prey, she kills their livelihood. It’s a kind of bullying really, and maybe a form of radical feminism. I don’t need a man for what he can give me; I want what he can give me. Jones is the villain here, and a delicious chimera if there ever was one. Best part of the film I figure. And kudos to the wardrobe department.

Despite the mostly seamless (get it?), winding, interconnecting plot threads in Cruelty, the whole thing comes across as way to busy and rushed. Feels like Coen comedy lite. Sure, it was amusing, and professional in its execution. And it did smack of a Coen Brothers madcap comedy, but everything was too measured. No real edge. No Hudsucker here. No tension. Slick like Miles courtroom babbling and everything streamlined because Marilyn has other fish to fry. Hurry, hurry, hurry. IfI get to timer watching—so to speak—there be a problem, laddie buck.

Welp, that’s about it as far as this installment goes. Other things of note (I don’t want to be derelict in my duties by ignoring other noteworthy sh*t. Yer welcome) that Cruelty sports the usual, eclectic, tasteful, awesome supporting cast of misfits and wastrels. We still have plenty of Andy Kaufman-esque “punk the audience” humor. There was a fair amount of head-scratching curiosity (one could say too much). The movie didn’t outright suck, but it was for lacking. Cruelty was a casserole of half-baked ideas and malformed notions, and maybe all a deliberate mess. Taken as a whole, Cruelty was sadly less than the some of its more impressive parts.

Y’know, now that I think about it, Cruely kinda played like a mashup of other Coen comedies. This specimen seemed fused together from ideas scattered on the cutting room floor. Was this part of any underlying comedy here? Like the Coens were trying to bait the audience by preying on blind fandom and Jones’ boobies?

And do they even have cutting rooms anymore?

Rent it or relent it? Relent it. Hey, not every Coen Brother film is worth quoting, y’dig? It’s like this is what happens when you find a stranger in th—Ow!

The Physician of the Middle Ages understood that the only real obstacle on the way to becoming a healer was ignorance. And superstition. And the Catholic Church. And the Inquisition. And traveling afar to unknown lands. And eventually HMOs. And…