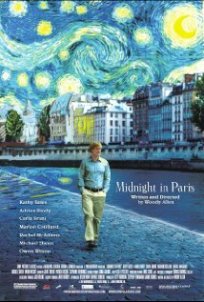 Would-be novelist Gil visits Paris with his fiancé and her family to soak up the local culture. One night, after too much family time, Gil hitches a ride in a classic Peugeot and finds himself magically transported back in time to the Paris of the 1920’s. Gil finds rubbing elbows and trading drinks with Hemingway, Fitzgerald and other luminaries of the ex-pat Jazz Age sure beats yet another jaunt to the Louvre.

I only like good movies. I often scan AllMovie or Netflix to see if my opinions of movies match up with what either the critics’ takes are or what audience ratings indicate. But are the films good because they jibe with what strangers have to say? Because there are other like-minded people out there with agreeable opinions such as my own? Is this snobbery? Everyone thinks that his or her tastes are great. Folks can get pretty heady about such stuff.

Maybe I was little too harsh in my last installment, covering the mindwipe that was Drive starring Ryan Gosling and Bryan Cranston. It wasn’t all bad. It had its moments. It just wasn’t what I wanted to expect (and I didn’t really know what to expect). I still wouldn’t recommend it though. What I’m saying is a little thoughtfulness in my critiques might be a welcome thing. I can rail with the best of them, and when a film is disjointed, poorly paced, fails to follow interior logic, or if the acting is just plain dumb, I get cranky. But still, I feel a little thoughtfulness can go a long way.

Which brings us to this installment. Midnight In Paris was not a critical dud, and audiences happily plunked down their monies to catch it. So how does this film fall under the aegis of “dubious reputation of lack of box office mojo?” One small thing that I intend to expound upon for as many paragraphs as it takes. That thing the audiences were complaining about—if you can believe this coming from Woody Allen’s oeuvre—that it was “overly intellectual.”

Like this is a crime. We as filmgoers are already fed to the choking point—mostly during summer—with so much pabulum already, one would think a intellectual film that did well at the box office would be a good thing. I think it is. I’ve seen enough lowbrow films in my day (and don’t get me wrong, I find I like any Adam Sandler movie that has him playing a sport delightful. Too bad there are, like, only two) to bang my head against the wall and spit up my popcorn, threatening to walk out of the theatre. But I also like my Fellini, Kurosawa and, yes, Woody Allen films too. Most of those are thoughtful, smart pieces of cinema that could be or were popular.

So what’s wrong with “smart film?” Does it make the average moviegoer feel dumb? I heard somewhere that there was a theater warning patrons that Terrence Malick’s Tree Of Life had, not graphic violence, sexual situations or extreme language, but “philosophical overtones and existential themes”. Stop the projectors! This was a warning. A warning. To average citizens. About smart sh*t in a Brad Pitt movie. Huh? This is a bad thing, apparently, according to the laymen.

Here’s a fact: people are stupid. I don’t mean people in general. I mean the collective sheeplike hive mind that is the nebulous concept of “people” is what is stupid. “What do they know?” is a phrase bandied about by all of us at one point in time. “They” is people, and if people are made to feel stupid, then they get what they deserve, and’ll probably miss out on cool sh*t and die angry.

Before I go off on another bilious tear, let me say that tempering thoughtfulness with intellectualism made Midnight In Paris a small gem…

Gil (Wilson) is a Hollywood hack and a budding novelist. When he and his fiancé Inez (McAdams) and her parents take a trip to the City of Lights, Inez and family are too caught up in the idea of Paris, its pretensions, for Gil’s tastes. He eventually gets restless with being inundated with too much Parisian culture. He goes for a stroll one evening, lost in the winding streets after too much wine when at midnight, he happens upon a ride in a classic Peugeot. Gil’s magically transported back in time to a swinging party hosted by none other than the Fitzgeralds, Zelda and F Scott to be precise, with lots of bathtub gin and a live performance by Cole Porter. Over the course of several evenings, Gil drinks with Hemingway (Stoll), gets writing advice from Gertrude Stein (Bates), and carouses with Picasso’s mistress, Adriana. Gil is rubbing elbows with artistic elite of 1920’s Paris, if only for a Cinderella moment. And happy as a pig in sh*t, more so than in his clumsy 21st Century life…

If this premise appeals to you, apparently it didn’t appeal to the masses. Well, some of the masses. I guess I’m one of the few that found it appealing; otherwise I wouldn’t have rented it. Woody Allen’s films have almost always been intellectual, even the dumber stuff like Bananas and Sleeper. Midnight In Paris is the only movie in his filmography that I know of that has been so overtly intellectual. At lease, appealing to the intellectuals out there.

Am I saying that I’m an intellectual? Hell to the yeah. The notion of conversing about writing and getting tight on absinthe with Papa Hemingway charges me up. Watching Gertrude Stein argue with Pablo Picasso about each other’s interpretations of a portrait? Bring it on. Having Dali want to do and abstract portrait of me? “The Temptation of St. Anthony” is my favorite painting.

Does all that bother you? All that name-dropping? It would bother me too if I were outside the circle that Allen tries to condense into an hour and thirty minutes. It’s easy to see why folks could get alienated. The whole film is virtually a holy host of 1920’s celebs, too many for the hoi polloi. Too many writers, too many artists, too many non-Internet (save Wikipedia) connects to catch up with the times.

Enough about the dividing lines. What brought this film together for any smart audience to appreciate?

For one, the opening montage is great. Dozens of scenes showing off everything you need to know about Paris. The winding streets, the cafes, the out of the way places. Here is the setting. Adjust to it for the next 90 minutes, yer gonna be walking it. Good news is you won’t sweat.

Owen Wilson is at his Owen Wilsoniest here. Charmingly awkward. Wilson always has this air of “I’m in the wrong place” in most of his films, and it works really well as he Billy Pilgrim’s it between 2010 and 1920. This awkwardness translates into childlike wonder when Gil goes back in time and hobnobs with the writers and artists he meets, especially when he starts crushing hard on Picasso’s dame, Adriana (played gamely by a lovely Cottiliard). Yet on the flipside, this is a more mature Wilson, not so quick to act goofy and clueless to grab a laugh. This is not a laugh-out-loud film, but using Wilson as a guide, you get snickers. Following his childlike enthusiasm for this newfound world, you have to laugh inspite of yourself. It’s hard to be cynical with a movie like this one.

It’s the 1920’s, right? That means jazz and gin and flappers. The costumes are great. Everyone is nattily dressed in the attire of the times. Sumptuous attention to details. The backdrops to Gil’s fantasy world are so inviting that even if you’re not a big deal reader or even writer, you’d like to dip your toes into a party where the Charleston rules and gins flows like icy water. And as always, Allen’s soundtrack is  tasteful and thoughtful as ever, too.

Notable acting is key. Head and shoulders over the cast is Corey Stoll as Earnest Hemingway. His script is tight, just like his prose. And he has this stare that is just so convincing. Allison Pill as Zelda Fitzgerald is a hoot too, flapper incarnate and perpetually drunk and borderline psycho. Good stuff.

The whole film had a sophisticated Twilight Zone feel. Man hates present. Man visits past. Man wants to stay in past. The past in not where he belongs. The film questions the idea of a “Golden Age.” I’ve read somewhere that a Golden Age is when you were 12 years old. Despite the fact Gil is well over twelve when he takes his stroll into the Parisian version of the Zone, his juvenile enthusiasm is infectious.

Even if you’re not a self-proclaimed intellectual, you can appreciate what’s going on. This movie isn’t about who you rub elbows with, it’s about being comfortable with yourself. In your own shoes. Hell, there’s a message we all should hear once in a while. With or without the bathtub gin.

Rent it or relent it? Rent it. Get over yer pretensions and have a laugh (or more accurately a chuckle) with Wilson. As we travel afar with Owen, it brings to mind that old saying, “No matter where you go, there you are.”